For a limited time, we have added a special Five Year, $100 Subscription offer. During the Covid-19 pandemic of 2020, we have lost most, if not all, of the hobby shops and dealers who were selling Model Cars Magazine. To offset this loss, we are offering a special five-year subscription offer for a short time, until the pandemic is over, and we can get the magazines back in the stores.

Tom Daniel sent his latest creation, a super cool book for us car guys that goes a step above all the other drawing and design books that I have seen. Tom goes into the basics of simple drawing techniques and tools, tips and tricks, to get you started on drawing cars. Honestly, for me, this has been the best design and drawing book for cars that I have seen! Yes, I have quite a few drawing books, and I have always wanted to be able to draw, maybe even someday like my best friend, Jairus Watson! Tom’s book is so in-depth, yet it’s written, and designed, for guys, and gals, just like me. Those who have always wanted to draw cars, or anything with wheels and a motor, yet lack the basic skill, knowledge, and techniques to even begin know where to start. Over the years, I have doodled in dozens of coloring books, and this is the perfect stepping stone for me.

Yes, I will be following along this book, page by page, and hopefully I’ll be able to post some of my creative attempts along the way. If you have always wanted to try and draw and design cars, then you must get this book! The book retails for $29.95, and can be found on the Tom Daniel web site: www.TomDaniel.com. The direct link is: http://tomdaniel.com/td_store/car_art_prints/frm_car_art_prints.html

I have had a few comments about the black background in the GSL photos in the Contest Issue (#206). At first, I thought they just didnʻt like the black background, but after getting more than “normal” emails/posts on this, and since I havenʻt received my office boxed copies yet, I opened up my personal copy in the poly bag tonight.

Something seriously went wrong with the printing of this issue. I apologize to everyone who sent me emails/notes on this, but I really thought the photos were going to come out great. On my proofs, they were fine. They were almost perfect when I printed them as my proofs, which is supposed to calibrated from screen to printer, but the printed ones in the magazine: OMG!!!

Some were okay, but the ones, well, most of them, OUCH! I will see what printer says, because the digital proof was okay also. From what I remember in doing the mag in Denver, everything could be adjusted when the press was run. Someone should have seen this. It should have been caught, ink levels adjusted, or something. So, yes, the black backgrounds came out terrible in a lot of the GSL photos. Some were okay, but most of them, OMG. I will try and post the layout online, and you can kind of see the difference. With the way different monitors and screens are, not everyone will see the same colors/contrasts, but I think the original layouts will show what I was dealing with.

I feel terrible about this. I know we all learn from our misteaks, and this is one lesson I will never make again.

A basic overview of why the magazine does not get to everyone at the same time:

I can’t count the number of times we have had this complaint: “I haven’t received my issue yet. The hobby shop/friend/or other reader has received their copy or copies, and I have not gotten mine yet. What gives?”

We did a test when we had Plastic Fanatic years ago, when we used to mail the magazine from our house, using our bed as the distribution/sorting table.

It comes down to The Power of Six.

If there are less than six magazines that go to the same post office periodical drop zone (“PDZ”), then they get bundled together with all the other less than six copies/subscribers, and then sent to the main sorting station, which there are usually only one or two per state.

Then they get sorted out and hand placed with other slow boat pieces, like those bulk mail junk mail pieces every one gets.

If there are six or more, they go to the the nearest PDZ, which there is in almost every city or town. Then they get to your door quickly.

Does this make sense?

We mapped it out once and did a zone by zone analysis, which is how we ended up with our Power Of Six theory.

The local Post Office agreed, but they wouldn’t say so on paper or email.

Also note, these are own phrases/descriptions, the 4,000 pound mailing manual may call it something else.

And then a note from my friend, Tom Geiger:

USPS Mail gets bundled as follows:

3 – All mail going to the same sorting center, that has the same first three digits. In the zip code 07730,  077 is the sorting center. It’s gotten a bit more compact in the last few decades as they eliminate sorting centers, but they’ve stuck with the 3 digits.

S – STATE – All mail going to the same state

D – DEPARTMENT – All mail going to the same zip code  (your power of 6) – actual regulation says 15 or more pieces,  but may be less for magazines

F – FIRM –  All mail going to the same company location

So as you said, a bundle of mail going to the same zip code gets there in one step.  Other mail can go through several sorts and steps per the list above. Each step can take some time, but they’re pretty fast these days since most sorting is now automated.

When the mail does make it to the final zip code, they have a period of time to deliver it.  Some skids are marked “Deliver By 11/12/19” which would be time sensitive sales flyers and the like.  I don’t know the current time frame magazines need to be delivered by.

The carriers sort their regular mail into their bins in the morning.  If they have additional time, they are supposed to go to the mountains of bulk mail and sort as much into their route as they can.  They start with the expiring “Deliver By…” stuff.   And that’s why you get a ton of flyers and junk in Saturday’s mail… it’s expiring and needs to be delivered.

Issue #206 was mailed on or about November 7, 2019. It should be getting to your mailbox within the next week or two. Not everyone will get the magazine at the same time. If you have followed some older articles on this, it depends on how many people are in the same zip code, bundled in batches of six. Not everyone will get the magazine the exact same day. Mailing the magazine under the periodical rate (the only way that magazines can be mailed and be profitable) is subject to a set of rules and guidelines, meant to make the mailing as efficient, and cost effective, as possible. Sometimes it gets to readers quickly, other times it takes weeks longer. We have no control over this. Sure, we could charge 20 times more per copy to mail it, and have it sent via First Class Mail, but then we would have no subscriptions.

One thing I noticed just today is that this issue will mark the 20-year anniversary for Model Cars Magazine. WOW, 20 years! That’s a milestone. Although it doesn’t feel like it, especially since I have been so far behind. But, as they say, the worse is behind us.

Here is the Editor’s Corner for this issue, which tells the story of all the setbacks with me, and the magazine, over this past year or more.

Model Cars Magazine was started way back in October, 1999. We are the only magazine printed in the US that is published by and for the model car hobbyist. We love model cars! We are not a big company, with dozens of magazines in-house. We publish Model Cars, and that’s it! We love model cars. We build model cars. We collect model cars. Need we say more? Enjoy the web site, let us know what you think. We are now up to Issue #203, and yes, he’s still late. After seven back surgeries, you think he would be done with all this medical stuff (Gregg is the editor/publisher of Model Cars, and he has shared his life story with every one of the readers of Model Cars over the years).

Golden Bell Press printed/published Model Cars since the beginning, and as of December 2015, they have shut down, opting for early retirement for the Bell’s of Denver, Colorado. As such, we had to get ourselves a new printer, financing, and of course, that pesky back issue, but we are getting everything in order, bit-by-bit.

A lot of you have asked for another update, so this is what I can say now.

As for Issue #206, I’m still working on it! I really miss Harry P. The work he did was incredible. I know this issue will show how bad I really am at this whole graphic design stuff, but I have been copying, I mean creatively borrowing, his old layouts/styles/etc. I have also been reading a ton of design books, something I should have done back in 1995 when I started in all of this publishing stuff. Back then, I would see layouts I liked, in “real” magazines, and adapt them to Plastic Fanatic, and then later in Model Cars.

Itʻs September already (2018), and yes, still no new issue of Model Cars Magazine. Still doing the best I can at getting everything together, hopefully another couple of weeks and all the troubles are over.

Thanks for staying with us!

Atlantis Models
“Preserving the Past while Building the Future”

I am amazed at how fast the new t-shirts are selling. Pretty soon I’ll have to make another batch of them, hopefully even more sizes!

Thanks guys, this has been a great boost for me. Not only for the sales, but for the support! 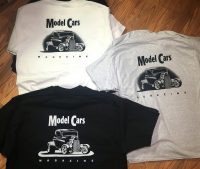