We received the new double kit of the 1950 Alfa Romeo Type 158 and the 1949 Lago-Talbot 4.7L Grand Prix kits, both in 1/24 scale. We love the retro looking art work for the boxes. Each of the kit is modeled in either red (Alfa Romeo) and blue (Lago-Talbot). The kits have engines, which will make those who love to detail classic inline six-cylinder engines happy. The only thing we don’t like, but it’s an easy fix, is the use of a clear insert that you have to paint silver to replicate wire wheels. We will run a series of articles on creating your own wire wheels, and sources to purchase aftermarket wire wheel kits as well.

I have seen the Lago-Talbot referred to as Lago-Talbot, and Talbot-Lago. So which way is correct? It looks to us that both are: It depends on the car you are referring to. This car, the Lago-Talbot Grand Prix 4 1/2 liter, was from the racing works at the Talbot-Lago factory, and it seems to replicate the 1949 version of the car that was all over the world in F1 races of that time.  We have seen factory race team trailers from that period with Talbot-Lago painted on the sides. If anyone has some insight to this, please let us know.

If you would like some reference photos, check out this link from one of our favorite web sites, UltimateCarPages.com: http://www.ultimatecarpage.com/cg/624/Talbot-Lago-T26C-Grand-Prix.html 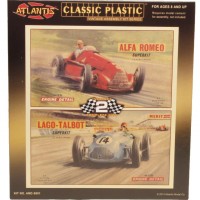 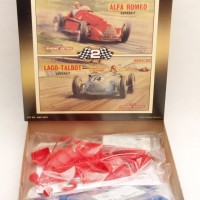 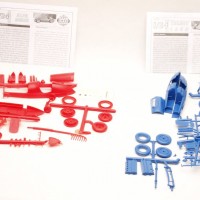 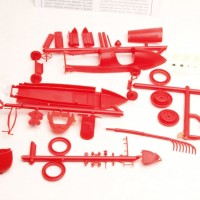 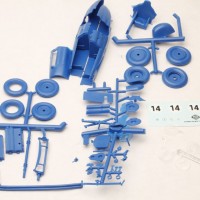 Here are a couple of in-progress photos of the Alfa Romeo 159 Alfetta. The photoetched and aluminum wire wheels are from a Profil24 kit (The Maserati Birdcage Tipo 63 kit), and look fabulous! Check out the Profil24 web site to order. 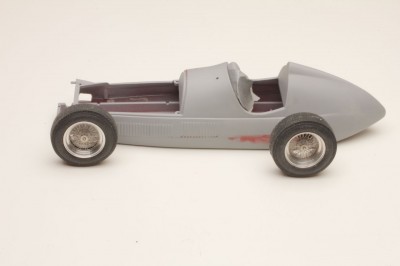 Here is the Alfa Romeo 159 kit in primer. The top and body seams have been filled. 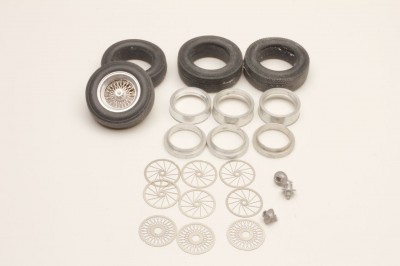 The aftermarket aluminum and photoetched wheels from Profil24 are gorgeous! 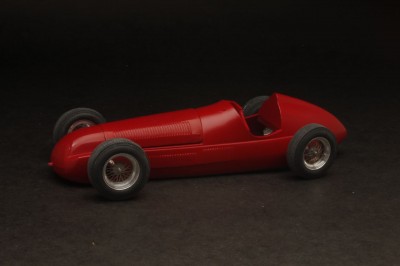 After a couple of quick coats with ScaleFinishes.com Ferrari Russo Red paint, and the Profil24 wire wheels, this kit is starting to look great!

Model Cars Magazine and Galaxie Limited have partnered together to bring you one of the most innovative model car building contests ever!

The idea is to build a Model Cars Magazine Racing Team, consisting of a race car model and any one of the Galaxie Limited trailer kits (21’ tandem axle, 36’ tri-axle, or 38’ tri-axle fifth-wheel), featuring your own version of the Model Cars Magazine racing team graphics–incorporating the current red and white MCM logo–to come up with the ultimate race car/trailer/graphics combination. The car can be any type of race car (NASCAR, drag, F-1, Sprint, Indy car, Bonneville, etc.).

The winner of this year-long contest will not only receive some great prizes (and maybe some contingency prizes as well), but the winning entry may be used to create a special edition set of decals for everyone to enjoy! Also, if your race car is based on a Galaxie Limited kit (‘48 Chevy or Dragster) along with your Galaxie Limited trailer, you will receive a double bonus as well!

So put on your thinking caps and see what you can come up with! You have a full year to get this done, as we will feature the winners in the August/September 2014 issue of Model Cars Magazine. Stay tuned for more updates, including official contest rules and a list of prizes, as well as some ideas sent in by some of our readers and builders. For now, get those creative ideas flowing and start planning your entry!

1) The race team MUST use any of the Galaxie Limited trailer kits.
2) The trailer MUST have the MCM logo on it. Art work for the logo can be found at the MCM web site www.modelcarsmag.com   Once on the site click on “Contests” in the menu, in the black bar at the top. That will take you to the contest information. Scroll down and you will find downloadable art for the red and white logo and the logo with the Mercury, either logo is acceptable.
3) The race vehicle can be anything you want, even a race boat. Putting the MCM logo on either the race or tow vehicle is optional. If either the race or tow vehicle are made from any Galaxie Limited kit the winner will qualify for additional prizes.
4) The trailer may be modified, but must be recognizable as a Galaxie Limited trailer.
5) Using a tow vehicle is optional and not required.
6) All entries must be in our hands by July 1, 2014. After that date no entry will be considered for any of the prizes. Submit your photos via e-mail or mail on a disc to us at contest @ modelcarsmag.com or Model Cars Magazine, Photo Contest, P. O. Box 89530, Honolulu, HI 96830. Remember to allow enough time for delivery if you use regular mail.

The rules are simple and designed to allow you to be as wild or mild as you want. Think out of the box and be creative. Wild paint schemes, create your own version of the MCM logo, it’s up to you. We are putting together a bunch of cool, fun prizes for the winners. Good luck and get busy building. 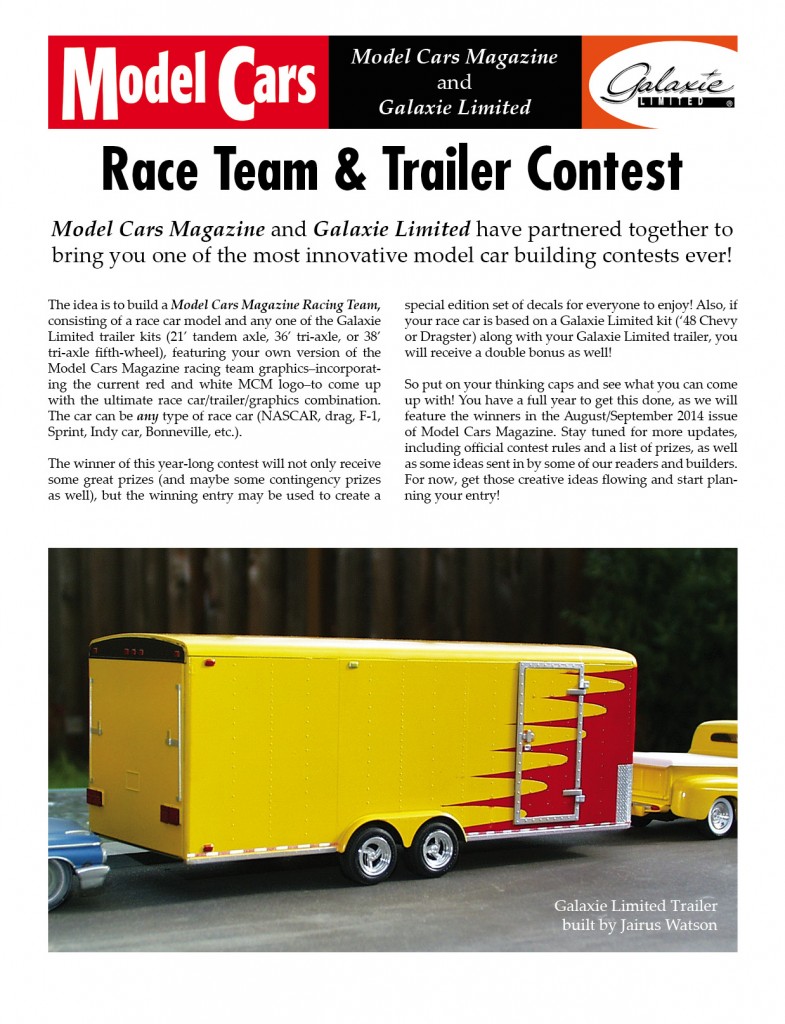 The GSL International Scale Vehicle Championship and Convention didn’t start at the level of competition and service that it enjoys today.  “GSL” – as the event is known so often – grew out of a failed competition that I tried to organize in the Midwest from Salt Lake City.  My inexperience and arrogance caused some hard feelings on the part of a few builders, and led to the creation of now-famed NNL Nationals in Toledo, Ohio.  That experience taught me a lot and, in 1979, I started the GSL Championship, which has now grown to an international presence in our great hobby thanks to the help of a first-rate bunch of guys and gals who, for the last thirty-four years, have worked tirelessly to develop, improve, and present this great event.  Please go here to learn more about the formation of GSL:  http://www.customclinic.com/News/NNL/nnl.html   Let’s talk about the GSL Championship:

The Concept Behind the Event:

GSL exists because of a desire to provide a professional setting for serious scale automotive builders to compete in a hospitable format where their efforts would be rewarded, where no one building style would be favored over another, and where the highest levels of the competitive spirit could co-exist with friendship, shared techniques and know-how, and where a respect for everyone’s work would prevail.  Since 1979, GSL has hosted almost 620 different builders, all of whom come to GSL to compete in good spirts, and have shared their modeling techniques and learned from others, and enjoyed the life-long friends we’ve all made at the Championship.  Newcomers are warmly welcomed, and often do exceptionally well in the competition – a small handful of first-time competitors in 2011 took home nearly a quarter of the total awards!

GSL is an attitude – a mind set – about building that seeks and celebrates convivial and high-end building, shared ideas and techniques, a willingness to learn, and to commitment to constantly improving levels of craftsmanship, while competing for the prestige of winning.

I hear it too often: “I don’t think I am ready to compete at GSL.”  This remark comes from all sorts of builders who believe, mistakenly, that successfully competing at the Championship is reserved only for those who spend many hundreds of hours and dollars on their entry.  While Best of Show winners do typically invest considerable time into their entries, placing in a Class isn’t an ancient art practiced by wizards, but merely requires a good “theme” for your entry, matched with thoughtful planning and meticulous construction, and attention to detail.

We offer nineteen Classes that cover every possible automotive interest, from the typical Street Rod and Custom models through the more esoteric “If I Had Styled It” Class where the builder assumes the role of a design chief for a manufacturer and presents a styling study of what that specific manufacturer might/could have marketed in a specific year.  We also offer other Classes such as this year’s Group 13 Class, where a designated model (this time, the AMT 1949 Ford Coupe) can be built in any style but using parts and materials that were available in 1978 or earlier, and the Common Kit Class (this time, the Monogram 1958 Thunderbird) where every competitor starts with the same kit, then builds it in whatever style he or she wishes.

GSL Judging is an interesting process which is based on an evaluation of two key elements – balancing the effort undertaken by the builder mixed with an evaluation of how well the model was built – its craftsmanship.  As you might expect, surgically-clean building is a requirement for successful competition.  But, that isn’t all there is to it:  GSL is also all about taking risks in the design and construction of a winning model:  an exquisitely well-done model that takes no risk in detail or construction (for instance, just a model built straight from the box with only details added) won’t beat another model – equally well done – where the builder opened the doors and trunk, added full wiring, operational suspension and other “risky” construction elements.  By similar analysis, a model that takes a lot of risks but isn’t built to high craftsmanship levels won’t prevail against a really well-rendered, detailed kit-based model.  Wise builders take risks and then render their work to a very high craftsmanship standard.

Judging starts on late Saturday afternoon and takes typically all night to complete. Bob Wick and I head up a three-person the Judging Team with a third individual – this year, Don Strong – being the third judge.  We also have Mike Smith (who’s restored cars for decades) available as a consultant to check on technical aspects of entries where questions come up. Seventy-Six Class Awards, Seven Master Awards and eight privately-sponsored awards are presented at the Awards Breakfast on Sunday morning

While the competition is the reason for the Championship, we also offer a lot of other activities for those in attendance. We open the event with a plenary session on Thursday morning followed by instructional seminars (on a wide array of topics) that run for the next two days, culminating with a presentation by the International Model Car Builders’ Museum on Friday night.  A Trade Show is presented early Saturday morning, and tours of the Museum start Saturday at Noon and run through 4:00 p.m.  The Contest Room is closed for Judging, and everyone reconvenes for breakfast on Sunday morning.

We have a staff of 11 people that administer the event, handle registration, assist with the photography of models, administer the Trade Show and Seminars and the hundreds of other tasks required to run an event of this size and reputation.  We’ll all wear “GSL Staff” badges – come up and talk with any of us about any questions, ideas, or concerns you have, or just to talk.

GSL is nearly four days of intense competition, but it’s also about friendships – both renewed and new – attending seminars, learning more about the Museum, and participating in a Tradition that goes back to 1979.  Typically, entrants from three foreign counties, and from 14 or so States are present.  GSL is the longest-standing competitive event serving just the model car hobby, and there’s a convivial atmosphere where newcomers are welcomed as if they’d been competing here since the earliest years.

Please join us May 2-5, 2013 for the Twenty-Fourth GSL International Scale Vehicle Championship and Convention!  We look forward to seeing you there!

It’s on! We’re offering six levels of savings over the Black Friday/Cyber Monday weekend, covering a huge selection of items.

This sale is on from 2pm Friday November 23 JST to 5pm Tuesday November 27 JST (that’s midnight Thursday night EST to midnight Monday night PST). All prices are clearly marked on the item pages, so just grab your price and GO! 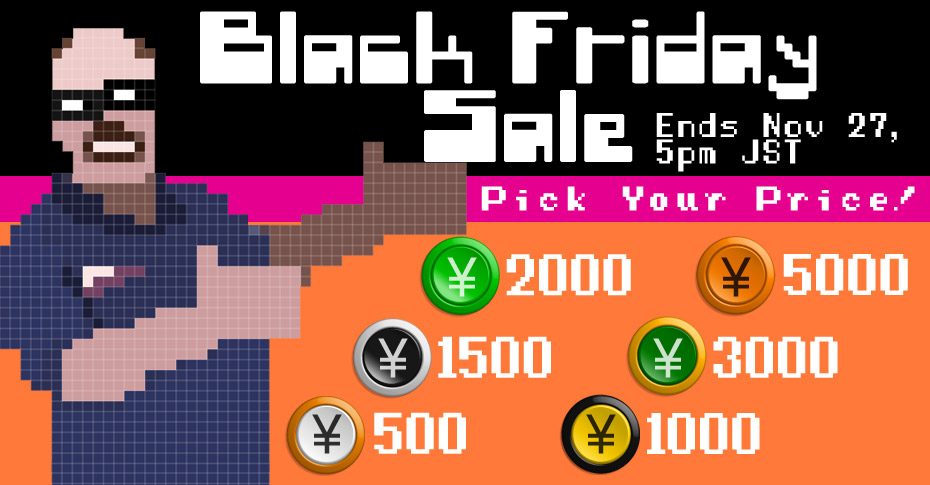