Looking for 73 Firebird Trans Am Hood 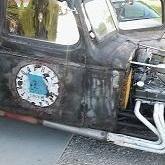