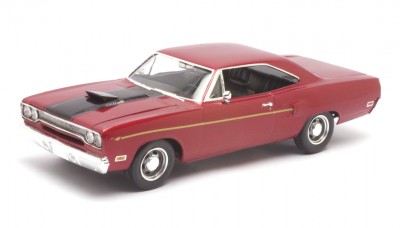 ENGINE:
The 17-piece engine represents a 440 Wedge with the Six Barrel intake option. Considering the age of the tooling, the fit isn’t exactly perfect; however, a small amount of putty and a bit of sanding here and there will fix this. The fan belt, alternator, and fan are all somewhat undersized and would be best replaced for accuracy’s sake–the spares box, and some good photographs of the actual engine, will help here. Additionally, the air cleaner, alternator, and valve covers are all chrome plated, and the factory stock originals weren’t, so removing the plating and painting these parts is all important. Another “need to fix” is the hol- low rear to the oil filter unit attached to the front cover. Decals are provided for the air cleaner’s 440 SIX BARREL logo and a Mopar stripe for the oil filter. Built and detailed, with the few fixes as noted above, the engine looks pretty good.

CHASSIS:
This is typical “Monogram simplified” and is identical to the chassis in their 1982-vintage ‘70 GTX kit and the 1995-vintage ‘70 Superbird. The basic chassis pan has good engraving throughout and has the front A-arms and gas tank molded in place. Front suspension is a simplified one-piece unit that includes the torsion bars. Rear suspension is also a simplified one-piece unit, with the exhaust system molded in. Since the exhaust pipes attach to the rear axle in a very unrealistic manner, simply removing these and gluing them directly to the chassis yields a more realistic installation. The squarish exhaust tips need to be carefully hollowed out to look like anything but a block of solid plastic. The underhood area/engine bay is molded to the body, with a separate radiator wall and radiator. Molded to the engine bay are the battery, expansion tank, and washer fluid reservoir, while a separate master cylinder attaches to the firewall.

WHEELS AND TIRES:
There are two wheel options, both chrome plated. Stock Magnum 500 five-spoke cast types, same as the aforementioned GTX and Superbird kits, or a set of mid-1970s-style Mopar slotted steel wheels with 1970-71-style dog dish hubcaps. Though some ‘70 Road Runners did come from the factory with steelies and dog dishes, these aren’t the right kind. Missing Link Resin Casters offers a set of 1/24 scale steelies and corrected dog dish hubcaps for Revell and Monogram 1/24 scale 1970-71 Plymouths that are far more accurate. Tires are four black vinyl no-names (former Goodyear Steel Belted Radials). Optional on ‘70 Road Runners were Mopar’s Rallye wheels, and if that’s your pleasure, grab a set from the Revell (or Monogram) ‘70 Challenger T/A, ‘71 Hemi ‘Cuda, or ‘71 Plymouth GTX.

INTERIOR:
This is the star of this kit. When R-M planned this upgrade from the 1982-vintage GTX kit, they decided to tool up a whole new state-of-the-art bench seat interior, and the execution of this is very good indeed. The basic in- terior only has the rear seat and package shelf molded in place. Side panels are separate and have superb three-dimensional detailing. Upholstery engraving on the side panels, rear seat, and two-piece front seat is nothing short of excellent. The dash is as the original GTX (and Superbird) with decent engraving and the steering column molded in place. The steering wheel (with delicately molded horn ring) is separate. Also separate is a complete hanging pedal assembly and a chromed pistol grip floor shifter. Decals are provided for the two main gauge faces, but the instruction sheet mistakenly identifies them as part numbers; the numbers actually refer to indicators for these items on the decal sheet.

BODY:
What is here is for all intents and purposes the same body as the 1982-vintage GTX, albeit with the GTX scripts removed. R-M did a good job on the body; the shapes are all there, and it doesn’t look clunky. At the front is a new grille, correct for the Road Runner, with separate clear headlight lenses, and a chromed front bumper with two tiny clear turn signal/running light lenses. Note the L-shaped projections on the front bumper, which are rubberized on the actual car and should be carefully painted accordingly. The rear end has a sepa- rate taillight panel with two plated taillights (Tamiya’s Clear Red makes quick work of these), and a separate plated rear bumper. Note there are no separate clear backup light lenses as there are with the ‘70 GTX kit–those were excised with the Superbird release. The hood gives you the option of mounting the Air Grabber scoop in the open or closed position; the open scoop has the requisite decals for its sides. Dual two-piece plated side mirrors complete the exterior.

DECALS:
Included on the all-new, matte finished(!) decal sheet, in addition to those previously mentioned, are front and rear side marker lenses, PLYMOUTH block letters for the rear panel and a Road Runner script for the grille in silver, lock cylinders in silver, the black panels and striping for the hood and cowl, 440+6 logos for the hood sides, a 440 logo for the rear of the hood bulge (this is the first time that this identifying feature of 1970 Plymouth B-bodies has been done in any kit), stock Road Runner side striping and logos in yellow, rear Road Runner stripes in your choice of black, white, or yellow, two 1970-vintage Plymouth Rapid Transit System logos, a white Plymouth billboard, two red/ pink/yellow custom side stripes and two matching stripes for the hood and cowl, two PLYMOUTH MAKES IT plates (one with yellow lettering, one with blue lettering), two Illinois 440 SIX plates, and two Wisconsin 16441 plates.