How To Make Working Hinges & Latches, by Jairus Watson

From the December 2009 issue of Model Cars Magazine

Although there are many ways to accomplish hinging and latching the examples shown here are what I have found to be the simplest options and present the greatest “in-scale” appearance possible. Hinges: The first step should be construction of the hinges assuming that the doors are already cut open. Begin by cutting strips of brass from a sheet .010” in thickness and bending them over a piece of steel piano wire .020” (see illustration A & B). The pieces are then clamped in a small hobby vise (illustration C) and the pin is pushed over slightly to one side. The reason for this will become clear later. To make a solid hinge, the brass should then be soldered together before filing to shape. Do not worry if some solder flows in to the pin area. This can be cleaned out using a .020” drill bit! The next step is shaping them into matching pieces. One should be cut as the inside piece and the other the outside. Using a flat file with a cutting edge, shape them like the illustration shows, testing fitting from time to time for free movement. One important feature of these type of hinges, besides their in-scale appearance, is that the pins may be easily removed fairly in order to remove the door during construction. Illustration G shows a very important step so watch carefully! The hinges are bent at right angles and glued to the door and the door frame so that the pin is actually on the outside of the car. This will require filing a small slot for the hinge to poke through the door. Also note that the hinges should be installed using a long piece of music wire as a temporary hinge pin which runs through both hinges at the same time. This guarantees perfect alignment during the gluing process. Due to slight rounding of the lower edge of the door in most ‘30s and ‘40s automobiles, the bottom hinge will generally protrude further than the upper hinge. I would do some research prior to actually installing the hinges. Some cars, like the 1941 Fords for example, featured an exposed lower hinge while the upper was concealed. With the hinges solidly attached using epoxy. The door jambs are created using Evergreen plastic which is added and filed to shape. The shape and type of jambs are usually unique to each make and model of car so we will not cover that in depth here. 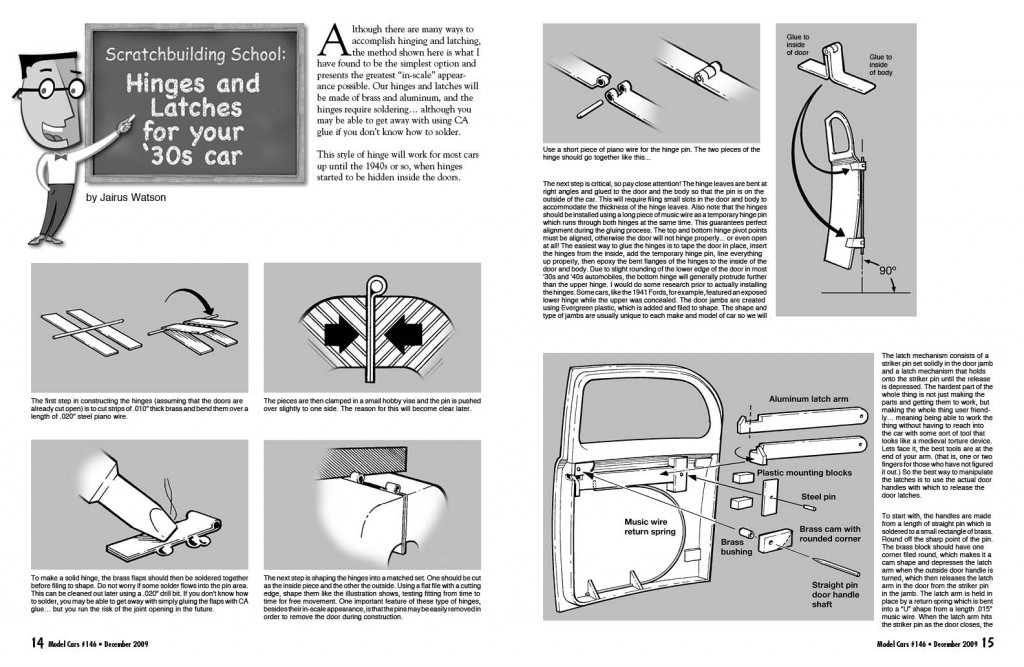 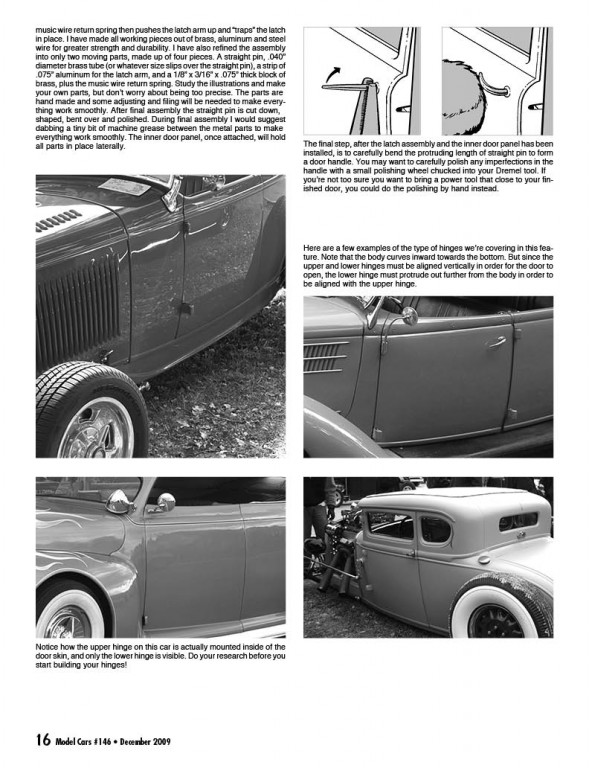