Clank. That’s generally a sound heard in my work area only when I bang my forehead on the bench vise clamped to the coffee table. Now I’ve found that I can make that same noise by dropping a Deuce on the workbench, if that Deuce is ACME Trading Company’s 1/18 Diecast ‘32 Ford Three-Window Coupe Kit. Emphasis on the word kit, as this is quite a bit more than just an unassembled large scale diecast. Wonder of wonders, with the exception of the comfort of styrene and the bigger parts, this box of stuff fulfills nearly every ‘32 related desire that I‘ve ever had. 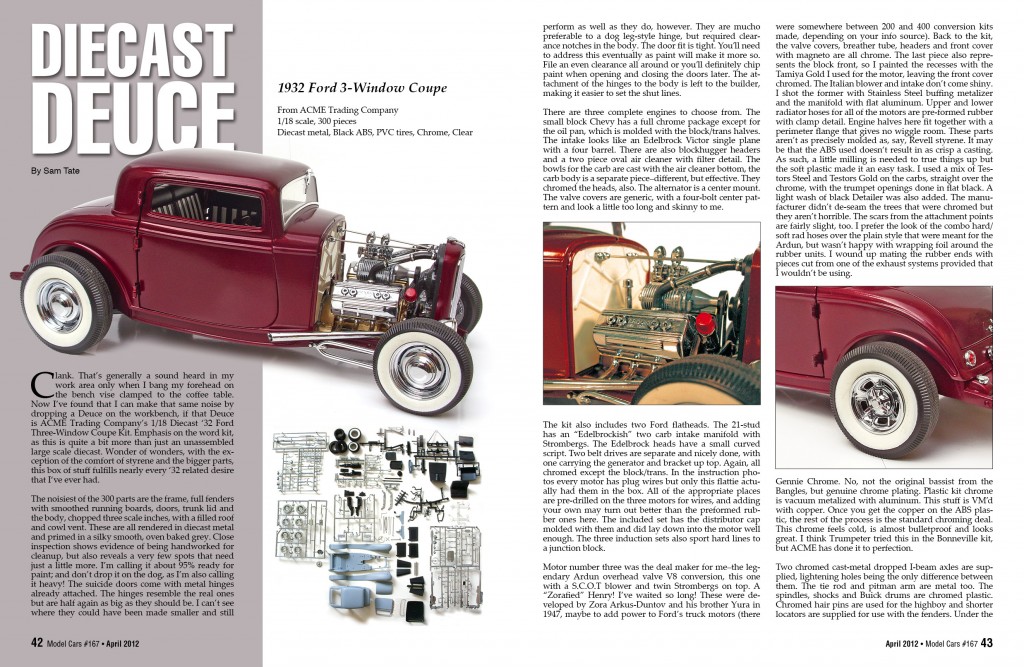 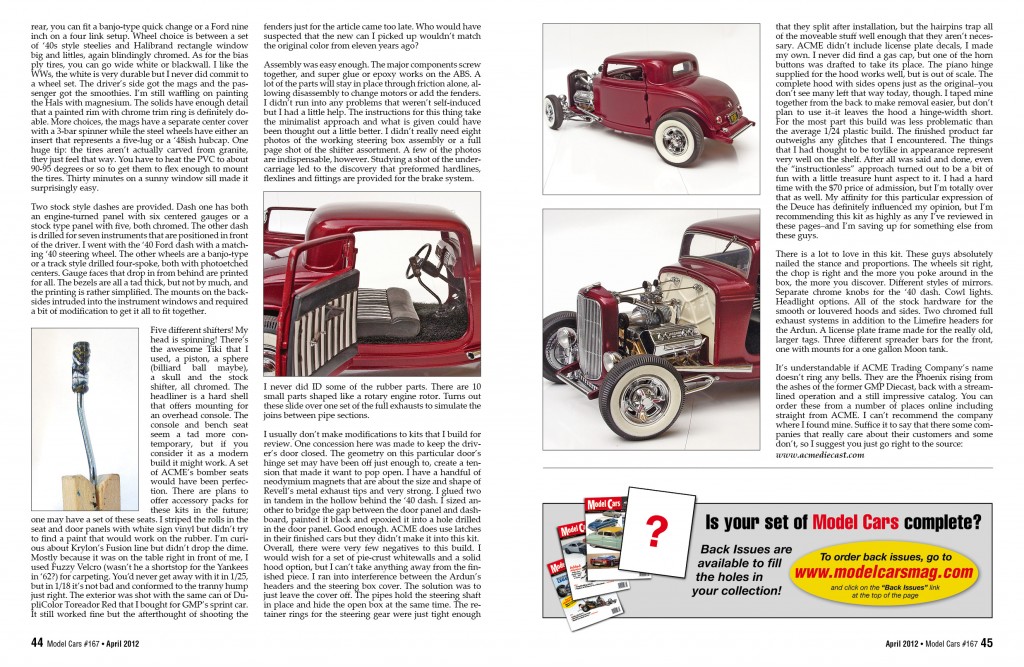 At this point, CMC’s latest 1/18 scale museum piece, the 1957 Ferrari Bartoletti Transporter (M-084), isn’t just the model of the year, it’s a head and shoulders standout for model of the century!

In the ‘50s and early ‘60s Formula One and World Endurance Championship racing was an almost purely European sport. Major teams used big purpose-built transporters capable of carrying three race cars back and forth across the continent while providing seats for the mechanics, (limited) sleeping space, a workshop area, and enough spares to take care of anything short of a major crash. The best-known of these are the Ferrari and Maserati transporters built on FIAT 642 RN2 bus chassis by Bartoletti, although Reventlow had another built that later became the Cobra team’s “home away from home” during the Championship years.

What you see here is a pre-production sample of CMC’s incredible diecast model of one of the two Ferrari transporters, chassis 02989, licensed as MO 42629. With 3,115 parts (no, I didn’t count them!) all assembled with CMC’s flawless craftsmanship, this model eclipses anything I’ve seen in this scale. It comes with an 8-page multilingual instruction sheet, the first page of which is devoted to getting it out of the box safely! Following the instructions, the first thing you see is the bottom of the model; a complete ladder-frame chassis separate from the lower body with real metal multi-leaf springs (they function) doubled at the rear, plumbed fuel tanks and hydraulic reservoirs and flexible black plastic brake hoses. Everything, including the long exhaust system, is held in place by tiny metal clamps and even smaller screws or bolts. Steering works via scale-size tie arms and the vertically mounted air hoses are there, too. All tires, including the spare, have legible sidewall details and the spare is held in place behind its door with a scale clamp and over-center lock. Oh yes; the driveshafts spin as the wheels are rotated.

Stand the model on its wheels and watch it settle as those metal springs flex–this beauty is no lightweight! Everything, from the multi-piece grille to the functional tailgate and latching top bar, is exactly as seen in photos (www.goodingco.com) or in the Mike Sells’ scale drawings; watch for more of Mike’s work soon in a new Racing Transporters book. The flawless two-tone paint and carefully printed graphics are exactly as in period photos, down to the lack of a yellow shield behind the prancing horse. I counted 18 opening panels (doors, storage compartment/workshop, spare tire and tow hitch covers, water and fuel caps, battery box and cover, and more) all opening correctly on scale hinges and closing tightly with an audible snap. The ramps are all aluminum treadplate and one opening panel houses a drawer with chocks for three cars. And did I mention that you can unlock the hoist, lower it on scale cables, and then raise it to the top position with one of CMC’s racing Ferraris? I tried it and it works just as advertised, loading, storing, lowering, and unloading 1/18 scale Ferraris with scale functionality.

The driver and passenger doors open to show leather-upholstered front and back seats and a nearly-horizontal instrument panel with legible (of course) gauges and switches that once again match photos. The engine cover (yes, the table top with its chrome safety rim mounted on it is correct) tilts back to show the six-cylinder diesel engine. There are no plug wires, of course, but the fuel lines and plumbing are there. If you want a possible nit, the restored transporter’s engine is bare metal, not red, but I haven’t seen 1957 photos of the engine. “Body-off” photos in CMC’s brochure show lots of engine and front suspension detail that can’t be seen in the assembled model–but it’s there!

Once again, it’s not the sheer number of parts that make this model incredible, it’s the complete lack of a smudge or any hint of adhesive holding those 3,115 parts together–and the overall scale fidelity. Every part looks just right in comparison with its neighbors. The overall shape and all the details look perfect to me while all dimensions check out to 1/18 scale very well. There’s more functionality here than I’ve ever seen in a mass-produced model (I was privileged to watch Randy Derr as he built that sprint car) and I’m sure there are quite a few features of this model that I still haven’t found yet!